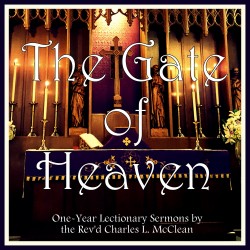 Now when these things begin to take place, look up and raise your heads, because your redemption is drawing near.

I wonder how many times you’ve found yourself asking, “Where will it all end?” That’s not the kind of question we’re likely to ask when things are going well, but I’m sure we’ve all asked that question in times of personal crisis, or when faced with family difficulties that just won’t go away, or on those days when we become so painfully aware of the violence and conflict in the world, of the deprivation and hunger, the sheer misery that mark the lives of millions. It’s then that we ﬁnd ourselves asking, “Where will it all end?”

Just a few short days after those terrible events we’ve come to call “9-11”, I received a beautiful card from a very dear and considerably older friend encouraging all of us “to remain strong in faith and prayer because,” she said, “no matter what might happen in the meantime, we Christians already know how the story ends.”

And how does the story end? In the coming again in glory of our Lord Jesus Christ to judge the living and the dead and to usher in His beyond-imagination glorious kingdom which in His love He prepared for us from the foundation of the world. That’s where it will all end!

To many people of course our Christian belief in Christ’s coming again has nothing to do with the urgent demands of life; it seems to deal with what to them is at best an utterly remote possibility— in fact an event that in all likelihood will never take place and therefore can be safely ignored. And if truth be told, even within the visible Church there are people who have in fact abandoned this hope in part because misguided teachers have so distorted our Lord’s teaching about this with all kinds of bizarre notions and have even attempted to predict the exact day and hour of His coming— despite the fact that our Lord Himself said: “Watch, for you do not know on what day your Lord is coming,” and “the Son of Man is coming at an hour you do not expect.”

In the Gospel for this Sunday our Lord does in fact speak of the signs of the last days: “signs in sun and moon and stars and upon the earth distress of nations in perplexity, the sea and the waves roaring. . .men fainting with fear and foreboding at what is coming on the world.” But what is so often forgotten is that, according to Holy Scripture, all days from Christ’s first coming in lowliness until His second coming in glory are in fact the last days – the days when God is at last bringing to completion His truly loving purpose for the whole creation. Saint John wrote, “Children, it is the last hour,” and Saint Paul addressed the Christians of his day as those “upon whom the end of the ages has come.”

And so when Jesus says, “When you see these things place, you know that the kingdom of God is near,” Jesus is speaking in terms not of our human time-table but in terms of God’s time-table which is another thing altogether— the Lord “with whom one day is as a thousand years and a thousand years as one day.” In a word, the signs of which Jesus speaks tell us that He is coming, not when He is coming as Jesus said, “Watch for you do not know on what day your Lord is coming,” and “Watch, for the Son of Man is coming at an hour you do not expect.”

Someone has said that our Lord’s coming again has to do not with a date but with an attitude. “Not a date” because the day and hour of His coming are known only to Him, “but an attitude”: an attitude which is neither cynical despair and resignation nor naive optimism but rather a deep and abiding hope which can face the very worst and still rejoice because it is hope grounded solely in Christ: the Lord who through forgiveness makes each moment of our lives a new beginning, who brings good out of evil, life out of death, and who will in the End deliver the dying creation and wonderfully transform all things by the light of His resurrection. As Saint Paul writes to the Church at Rome, “Creation itself will”— in a way we cannot now even dimly imagine— “be delivered from its bondage to decay and obtain the glorious liberty of the children of God.”

We live in a dying world and you and I are dying people; the grave awaits each and every one of us, and the world as we now know it will come to an end. The signs of which Jesus speaks in this day’s Gospel tell us that this is so: “signs in sun and moon and stars and upon the earth distress of nations in perplexity, the sea and the waves roaring. . .men’s hearts fainting with fear and with foreboding at what is coming on the world.” In fact all the dismal and destructive realities of life tells us that this so. But if we remember and take seriously the words of Jesus, these signs— these grim reminders of our own mortality and of the world’s approaching end— are no cause for despair. Seen with eyes of faith, they are even reason for hope because they tell us that the Lord we love and long to see is in fact on His way; He is coming to gather His redeemed children into the kingdom which in His love He has prepared for us from the foundation of the world.

So where will it all end? Not in death and oblivion, but in the coming again of the Lord whose love we already know through His manger, cross, and open tomb. So, “When all these begin to take place, look up and raise your heads because your redemption is drawing near.”

And so I would like to conclude this morning with some beautiful, yes, poetic words of John Henry Newman about the altar, the altar of the Sacrament, as this place where our hope is kindled and sustained. Newman says,

But while the times wax old, and the colours of the earth fade, and the voice of song is brought low, and all kindreds of the earth can but wail and lament, the sons of God “lift up their heads for their redemption draweth nigh.” Nature fails, the sun shines not, and the moon is dim, the stars fall from heaven, and the foundations of the round world shake; but the altar’s light burns ever brighter; there are sights there which the many cannot see and all above the tumults of earth the command is heard to show forth the Lord’s death and the promise that the Lord is coming. “Happy are the people that are in such a case!” who, when  wearied of the things seen can turn with good hope to the things unseen; yea “blessed are the people who have the Lord for their God.” “Come unto Me,” He says, “all ye that labour and are heavy laden and I will give you rest.” Rest is better than toil, peace satisfies, and quietness disappoints not. These are sure goods. Such is the calm of the heavenly Jerusalem , which is the mother of us all; and such is their calm worship, the foretaste of heaven, who for a season shut themselves out from the world, and seek Him in invisible-Presence, whom they shall hereafter see face to face. (J. H. Newman, Parochial & Plain Sermons VII, l58f)

And the peace of God which passes all understanding keep your hearts and minds through Christ Jesus unto life everlasting, +Amen.